Traditionally April to the end of August has been WRAS's busiest time of year although in the 2014 the season started early and finished early, started late in 2015 and went well into September, and in 2016 it start mid April and through till October merging with a fairly busy Autumn hedgehog season, meaning WRAS completely missed its quiet Autumn period. 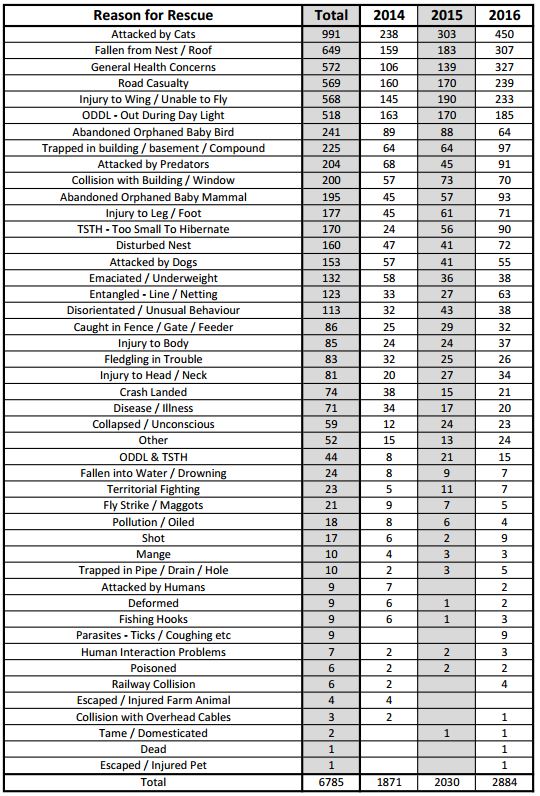 The above table is not completely accurate as this is based on the initial call out assessment, which can change. However, categories like Cat, Dog or predator attacks are only used where the someone has actually witnessed that animal attacking the casualty, otherwise the injuries are recorded as one of the injury categories where the cause is not known.

Human attacks, cat attacks, dog attacks, road casualties are suspected to be much higher than recorded here as they are often not witnessed but the injuries and location are consistent with those type of incidents. 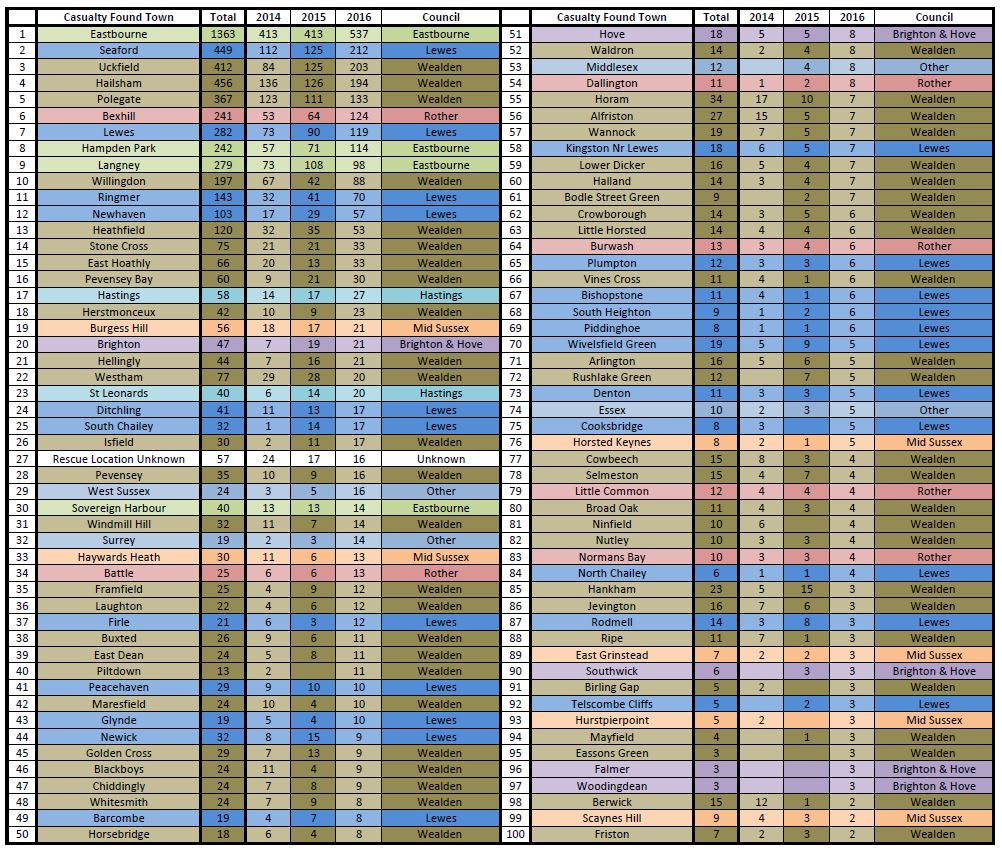 Above is a table of the top 100 towns and villages which East Sussex WRAS attends. Eastbourne has always been the heart of our area and we are best known in that town than anywhere else hence the highest number of calls to that area.

There are rescue organisations in Tunbridge Wells, Bexhill, Hastings and Brighton so often calls local to them are passed to them in the best interest of the casualties welfare.

Over 80% of all casualties we deal with we attend out on site with a further 3% collected from veterinary centres. 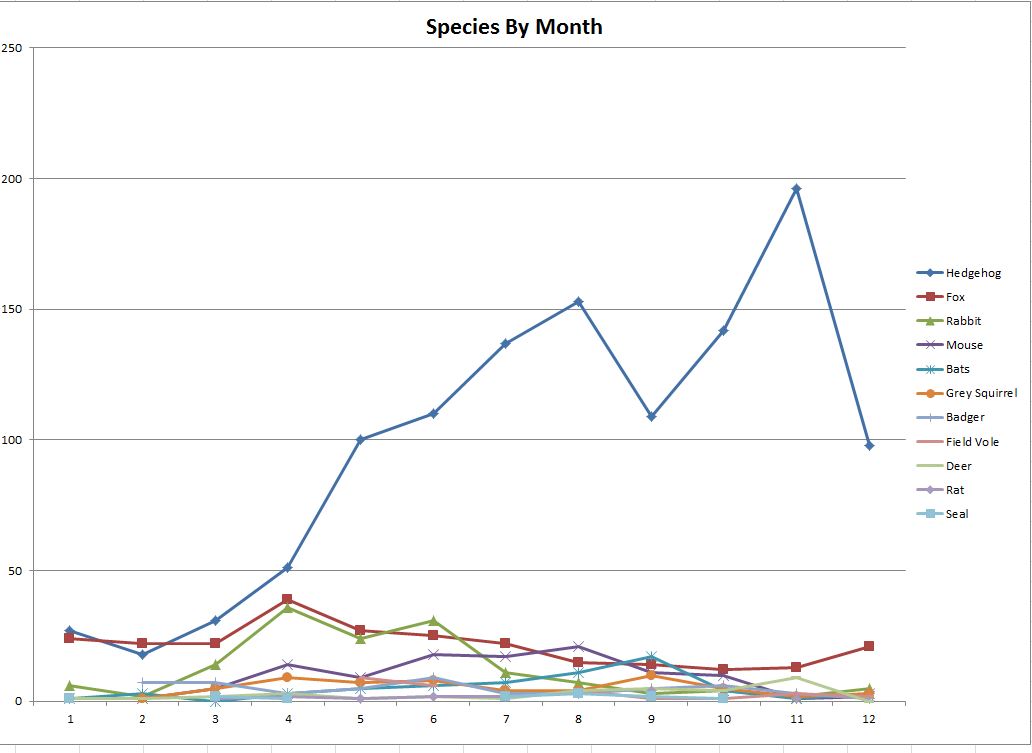 The above graph shows a selection of mammals we deal with. The Hedgehog is the most common mammal being dealt with way more than any other species. This is probably because they are resident in our towns and cities and are not able to run away as fast as other species like Foxes, therefore get themselves into trouble more. 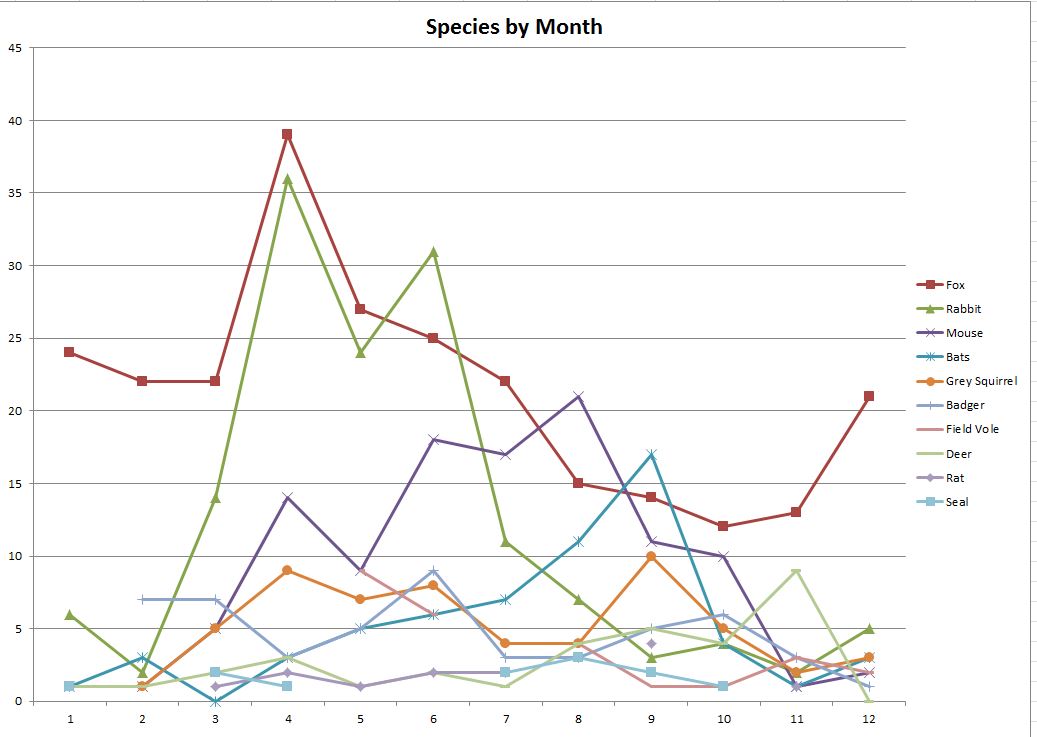 This is the same graph but with hedgehogs removed to make it clearer the peak times of the year when theses species are dealt with. 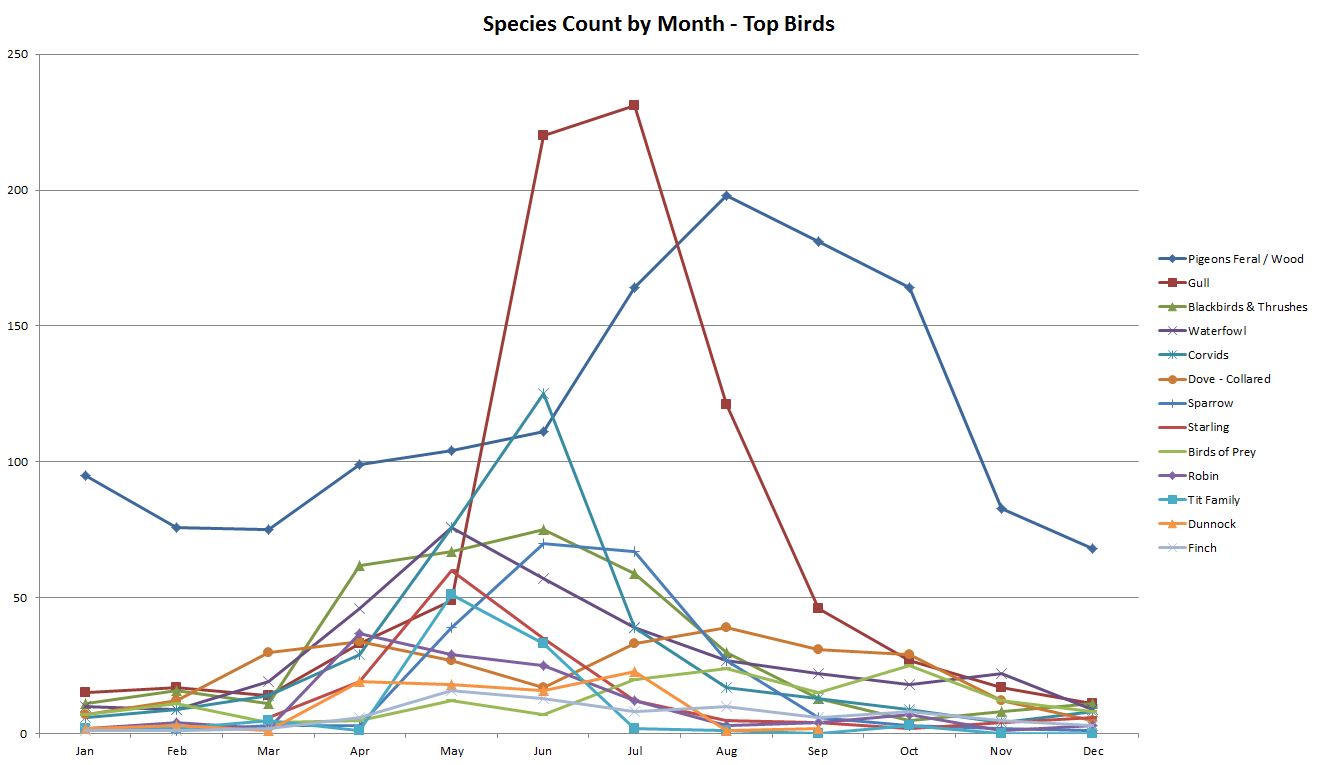 This is a graph of the top bird groups showing the rise in different species at different times of the year.

Below are a few graphs show different types of call-outs and the frequency throughout the year. 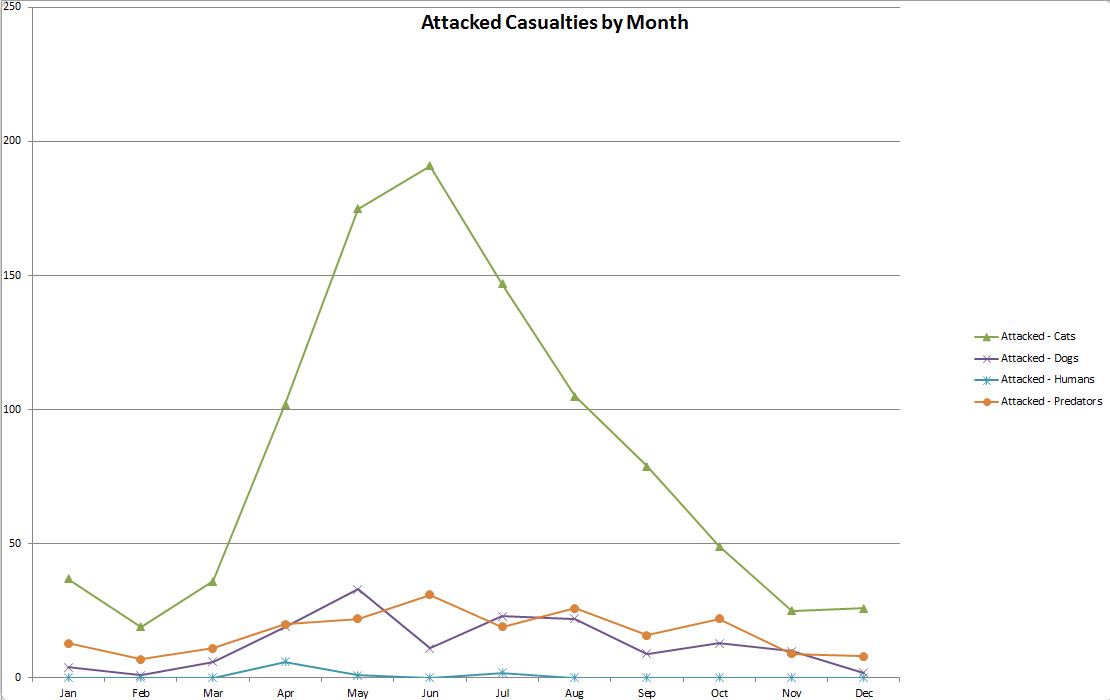 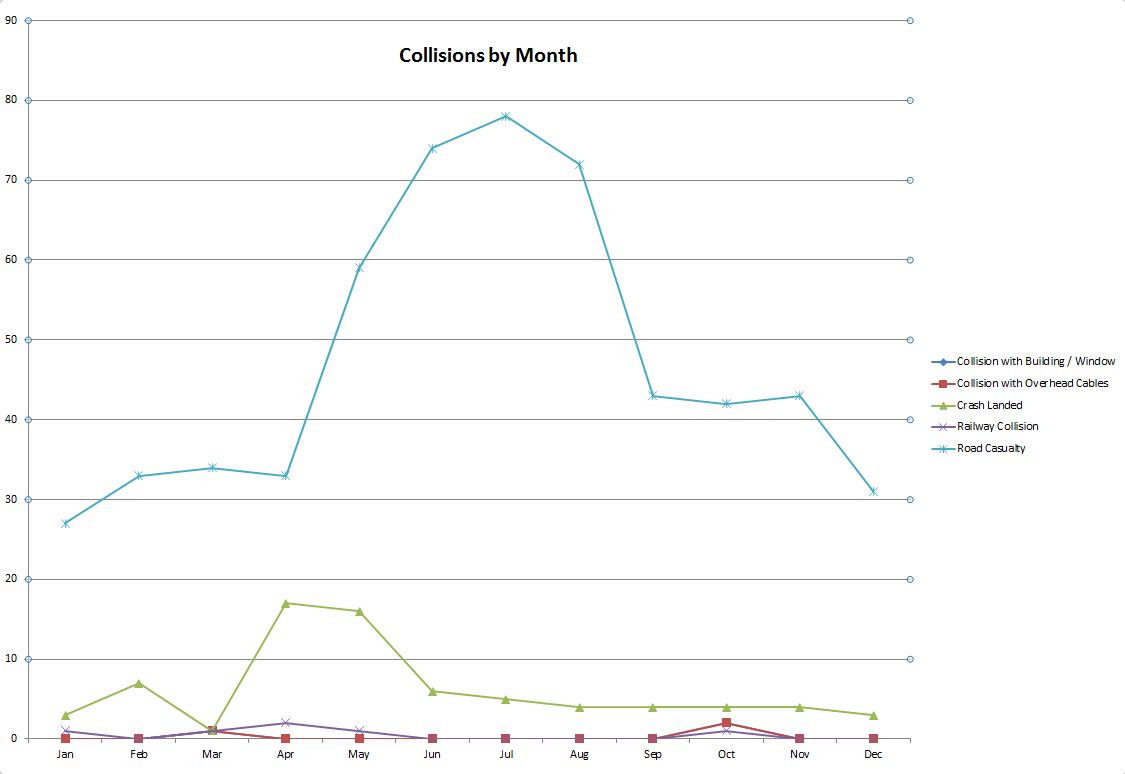 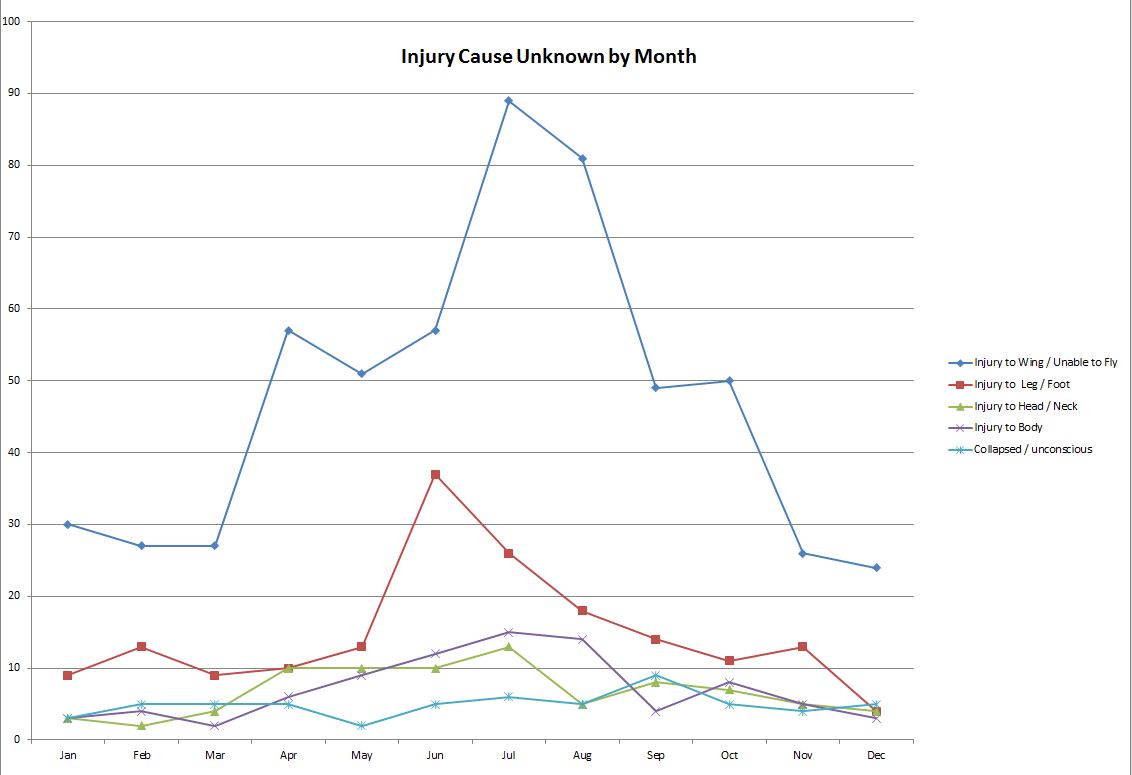 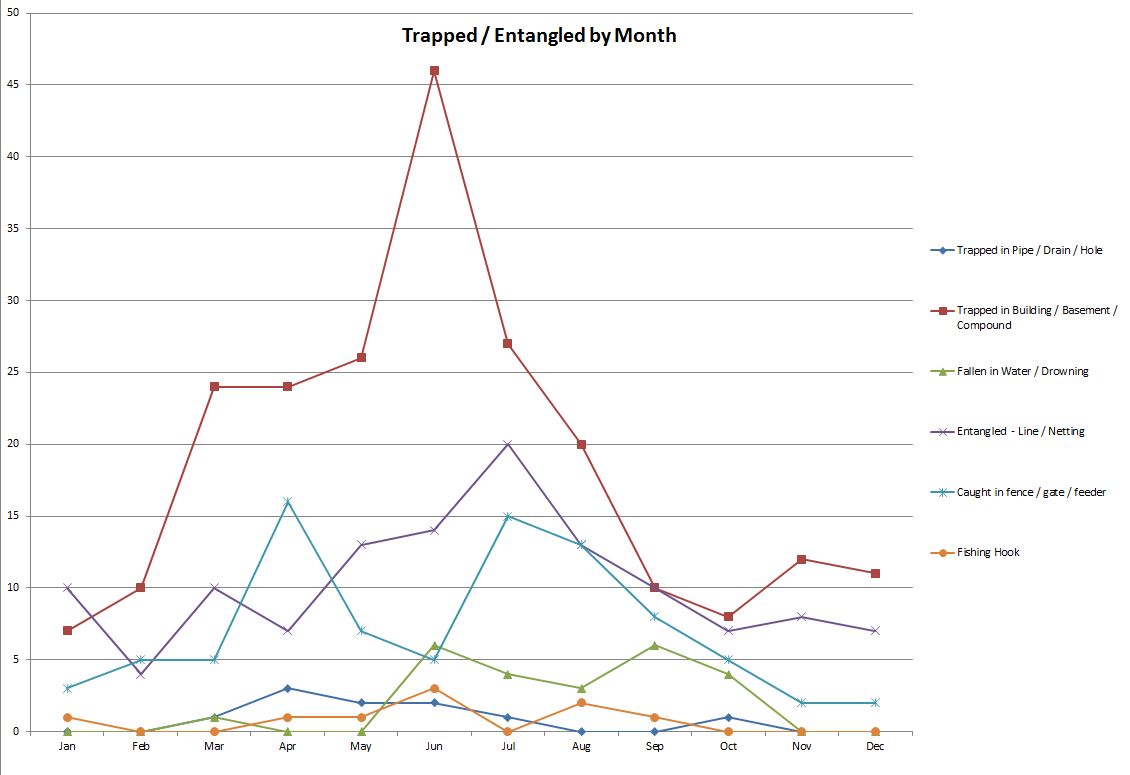 This little Hedgehog will need everything crossed, found alone in the middle of a lawn just hours old. Without any first feed from mum we are very guarded at the moment but will do everything we can to pull her through ...

Home time for 2 gulls today,
One was rescued from Seven Sisters Road Eastbourne, unable to fly. Luckily they had no broken bones but was rather underweight so with some food and weight gain she was quickly back to strength.
The other wasnt quite so lucky, she came in with a fracture to the right wing, an xray was taken and it wasnt as bad as we thought so were positive for a good outcome. Over the last week they have been buildling strenth and today decided to keep sitting on our high cages during a test flight so was given the okay to return home ...

Great start to the day mum and 10 ducklings who got a little lost in gardens returned back to their pond ... ...