Two fox cubs have been reunited with their mum thanks to East Sussex Wildlife Rescue & Ambulance Service (WRAS).

Two fox cubs came into care over the weekend, one in Eastbourne found wandering around a lawn and a second from Newhaven seen barking at a doorway.

Both cubs were picked up as out in the open and checked over but as they were in a good condition rescuers decided to try and get them back to their mums.

When rescuers returned to the Eastbourne garden they managed to find close by a fox's den close enough to be where the cub had wandered from. "At this age about 3-4 weeks old, they start to get restless and will sometimes come out of their den wandering where their mum is, as she doesn't always sleep with them, especially as they get bigger and take up more room" said WRAS Duty Rescue Co-ordinator Chris Riddington.

The Eastboune cub was placed on the floor next to the den entrance and he walked straight back home after turning round to say goodbye first.

Chris then met Hannah in Newhaven and set up the next cub for release. "We normally leave them in the safety of a large box and let mum come and retrieve them. Annoyingly the cub was having none of it and kept trying to jump out. So after several attempted escapes I decided to ring WRAS founder Trevor Weeks for advice and explained the difficult situation" said Chris.

As the cub was quite mature and at an age where it would start to wander out of the den anyway, and as we knew mum was around, we took the difficult and risky decision of releasing the cub and monitored from a distance.

For about 20 minutes the cub sat by a back gate calling. "I monitored the cub from a distance until the cub started calling different. I approached slowly and quietly and could hear a commotion, and soon realised the noise was mum trying to climb over the fence with her baby. I dropped to the floor so I couldn't be spotted and peeked over the wall to see mum walking down the road with baby following closely behind" said Chris.

What an incredible night and an emotional one for everyone involved in their care. It's so important to try and get them back home to their parents for their best chance of learning life skills. It's a long process admitting cubs to hand-rear and takes up to 4 months in care. That's as long time in as foxes life. A time when they are learning important life skills from parents. They are also very expensive to rehabilitate, with special puppy milk and special food. 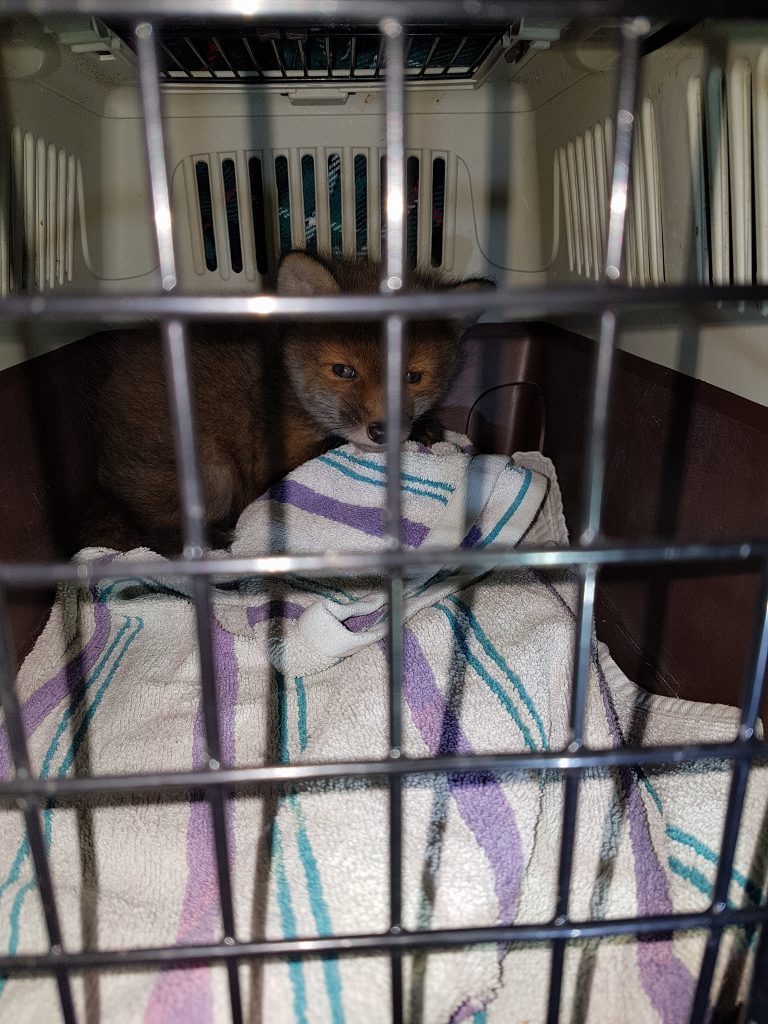 "We've worked some long hours this weekend dealing with casualties but its been worth it. We always try our best to help as many people and casualties as we can. When busy its not always possible to help everyone but we do as much as we can. It does get stressful and tiring at times but its worth it when you get to see cub being reunited with its mum," said Chris.

It is common for vixens to move their young as they out-grow their den. This process can take a couple of nights to achieve. Moving them one at a time she often leaves them hidden behind bushes or in long grass and comes back for them the following night. If you find a cub in long grass or hidden behind bushes, it is always best to leave alone unless it is obvious they are injured.

East Sussex WRAS is a registered Charity and relies on donations to keep its service on the road. If you can help support WRAS please make a donation at www.wildlifeambulance.org.

Raise vital funds for us and treat your friends and family to the perfect gift card. The new @GiveasyouLive multi-store gift card can be spent at over 100 high-street retailers and you'll raise money for us when you purchase! > instore.giveasyoulive.com/charity/eastsussexwras/giveasyoulivecard?utm_source=charitytoolkit&utm_... ...

Isnt old Albert just wonderful. I am just a little bit in love ❤️ I wonder what stories he could tell ...

East Sussex WRAS is devastated to hear the sad news that Folly Wildlife Rescue founder Annette Risley passed away a couple of days ago. Our thoughts are with her family, colleagues and friends who this has come as such a shock to. Annette has been an inspiration to me and the establishment of WRAS. She has helped and supported us deal with many poorly wild animals and birds over the years. Her kindness and support shown to us, especially in the early day, will never be forgotten. Annette is really one of several people who I would class as a founder of the modern wildlife rehabilitation movement in the UK. Her legacy will live on for many years to come and I feel privileged to have known her. Rest In Peace Annette, you will be missed by us all.
Trevor Weeks Founder of WRAS. ...