Rescuers from East Sussex Wildlife Rescue & Ambulance Service (WRAS) had to undertake a difficult rescue of a starling trapped inside the Brewers Fayre pub called “The Drove” in Newhaven last night (1st June 2017). 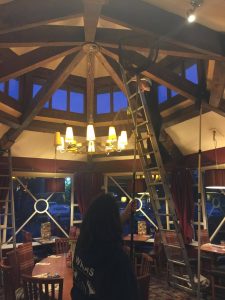 The bird had somehow managed to get inside “The Drove” and customers spent the evening watching the bird flying up high above the tables, flying from beam to beam and across to the windows looking for a way out. The bird was quickly named “Jim” Beam after the Bourbon drink being in a pub and flying around the beams.

Rescuers arrived on the scene about 9:15pm long poles and nets were initially used to catch the bird, but the beams in the ceiling made this difficult and restricted the movement of the nets.

“After a short fly round the starling disappeared, we couldn’t understand where it had gone. Our net heads were used to try and disturb the bird if it was on top of the beams but the starling never appeared. We were scratching our heads wondering where it had gone. Ladders from WRAS’s ambulance had to be used to reach up to the ceiling so Trevor could climb up and check” said Kathy Martyn WRAS’s Trustee and Senior Rescuer. 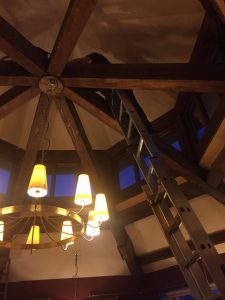 “When I reached the top of the ladder I couldn’t see the starling anywhere, I was perplexed but then discovered a narrow gap at the top where the beams meet, which the starling had managed to get inside. The gap was very small, too small for my hand to fit inside” explained Trevor.

Rescuers started searching their equipment for a suitable tool to use to help get the starling out. Trevor laughed “after managing to lift the covering board on the beam slightly we had to deploy a very specialist and expensive piece of equipment called an ice cream spoon to stop the bird from going further down inside the hollow beam, and encourage the bird up to the entrance hole where eventually I was able to gain control of the bird. With all the equipment we carry on board our ambulances we laughed that we couldn’t find anything better suited than a long handled ice cream spoon from the restaurant!”

The bird was soon secured and checked over and as light enough still outside, rescuers decided to release the bird straight away. The bird was release by Kathy and he flew straight off across the car park and up to the top of a nearby tree.

“Some great team work from everyone tonight, we certainly have an amazing team of rescuers at WRAS” added Kathy, “we hope Jim Beam the starling doesn’t go back inside look for any more spirits”.

This is far from the run of the mill boring Quiz Nights! With a mixture of questions involving tasting, watching, listening, making and more!

Tickets are £12.50 in advance or £15 on the door (space permitting).Teams of up to 6 people allowed. Licenced Bar.

Ticket price includes entry per person and a pasta based meal (vegan option available on request in advance).

It is customary for WRAS Founder to wear fancy dress, you are welcome to do so. There will be a medical theme this year. There will be extra points added for the team with the best fancy dress - but this not compulsory!