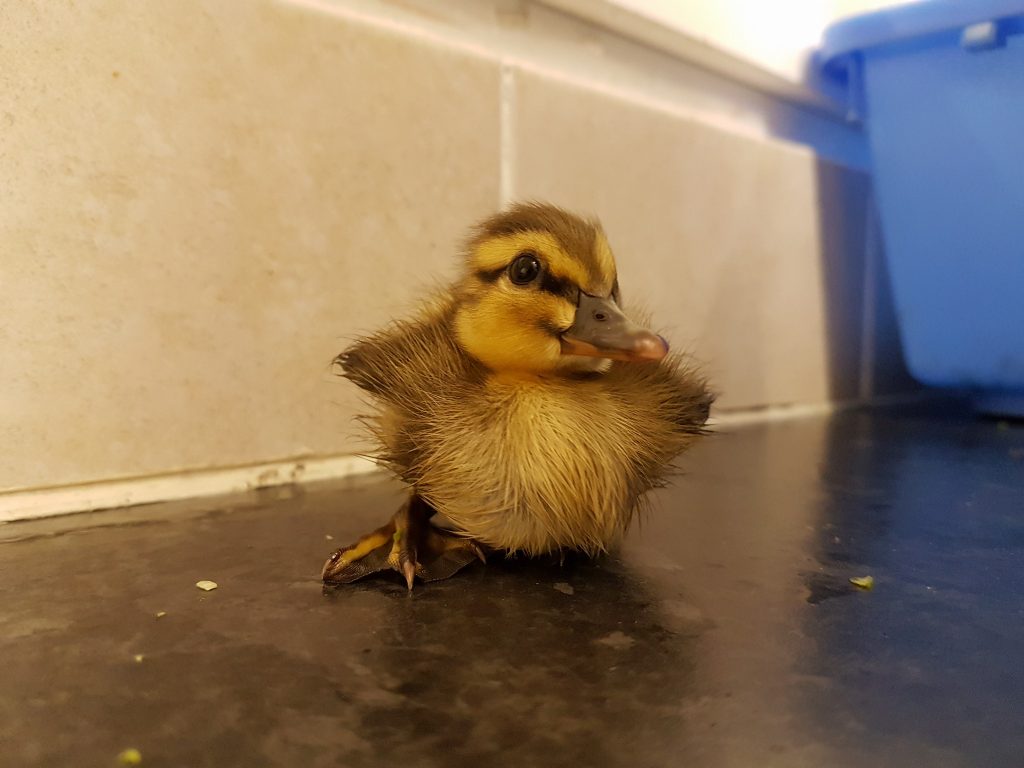 Rescuers had a difficult duckling rescue yesterday early evening at Princes Park Eastbourne. Initial reports were of 7 ducklings abandoned on the lake swimming around without mum. Fearing that mum had left them rescuers Kai Ahmed and Chris Riddington attended on site and began to search the area. Mum had been seen the previous day with 10 ducklings but she was no long present anmnd

“These rescues are always difficult. When you are working with waterfowl, they never stay in one place and you know that by the time you get there they will have moved somewhere completely different, but eventually we found them” said Chris.

Frustratingly the youngsters were tiny, thought to be no more than a week old. Not interested in seed or bread they just scattered every time rescuers got close.

“Working on a large open lake is very difficult when dealing with any waterfowl. A successful water rescue rests on you being able to move quickly enough and to get the birds into a more restricted area. You can’t zoom in and try catching them with a boat as they scatter, plus you run the risk of injuring them when so small or squashing them so the boat approach couldn’t be used. So Kai and I encouraged the ducklings towards the outlet to make them easier to catch. Once they were over the weir the situation would be much more manageable. Ducklings are very good at diving under water to get away and can swim surprisingly fast under water too” explained Chris.

Rescuers used long poles and nets and slowly encouraged the ducklings to the outlet stream. “Kai was on one side and myself on the other. Kai and I managed to catch three each leaving one which disappeared under the water fall from the weir. We climbed out onto weir and had to search by hand in and around the water. Eventually it was spotted and it was quickly rescued” said Chris.

The “magnificent 7” were rushed to WRAS’s Casualty Centre to be warmed up under a heat lamp.

They are none the worse for their ordeal and tucking into food well.

Every now and then we get a legacy or a donation in the post often via a funeral director where money has been collected for our charity at a funeral instead of flowers or a collection has taken place. We find it really touching that at such a sad time people think highly enough of our humble charity to choose WRAS to make donations.

We have wanted for a while to honour those people in a lasting way. In our reception we erected a “Memory Tree” on the wall, where leaves are being placed to remember those people.

These donations are invaluable and make a huge difference in keeping our service on the road so this is the least we can do to say thank you and remember those who, like us, loved wildlife.

Every time we receive a donation via a funeral directors or receive donations in memory of someone, we will place a leaf on the tree with their name on. We would normally welcome small groups of relatives and friends to visit, write the name on the leaf and tie the leaf to the tree by arrangement if they wish to do so. Unfortunately due to Covid our reception is not open for the public to visit and see the tree, but hopefully it will be in the near future. if you want to find out more please ring 01825-873003 ...

Rescuers worked until the early hours of the morning to rescue four bats stuck in a drain in Stone Cross on Monday night.

Amanda Pye from Beechfield Close, Stone Cross said "We heard a strange noise coming from outside the front door and at first we weren't sure what it was or where it was coming from. After some looking around we found these little creatures chattering away in the bottom of the drain so we called WRAS for help”

East Sussex Wildlife Rescue & Ambulance Service (WRAS) was called out to the incident at 9:45pm. Rescuers arrived on site about 10:20pm. The down pipe and drain grill had to be unscrewed in order for rescuers to be able to put an arm down to try and reach the bats.

“It was a difficult rescue and we needed to be very patient. We could only put our arm down so far as the pipe bent away out of sight, meaning every time we moved the bats crawled away out of reach” said Rescue Co-ordinator Trevor Weeks MBE.

Rescuers were able to catch three of the bats and get them into a secure condition. The bats were left close to the drain so their calls could be heard by the remaining bat down the drain.

“The last bat was really wary and the slightest move and it backed off out of sight. I waited for hours trying to catch him but eventually he disappeared and was not seen for ages” said Trevor.

Rescuers left a cloth hanging down the drain in case the bat decided to come forward and climb up and out of its own accord overnight.

Rescuers returned the following morning and used a camera to video inside the pipe , but there was no sign of the bat.

The three rescued pipistrelle bats were taken to Amanda Miller of the Sussex Bat Group for a check up and assessment. She confirmed them as being juvenile Soprano Pips. They were given a hearty meal and taken back after dark the following day and released onto the wall of the house to fly off and explore.

“We were very impressed with the speed of response and professionalism with which the whole situation was handled by the rescuer” added Amanda.

VIDEO USE: This video is free for use by local media to East Sussex UK, like BBC, Meridian ITV, local newspapers and radio stations. For all other use please contact East Sussex WRAS.

WRAS rescuers have dealt with 5 separate Kittiwake rescues in Seaford in the past week. They have all been underweight and lethargic. Sadly a few have died due to the severity of their condition but others are improving.