February despite having an extra day in it this year, has so far been quieter than normal.  The figures for January have been calculated and we dealt with 136 casualties. Which is the second highest number on record just 2 lower than last year.  These are typically very quiet months for WRAS.

This winter has been remarkably strange due to the constant mild weather. Most hedgehogs have not hibernated, although there are some local exceptions to this rule.  So despite the huge number we dealt with back in October and November we have not had to keep any in once up to weight as it has been mild enough to continue releasing them back to the wild.  I’ve never known a winter like this in the 35 years I’ve been dealing with wildlife. 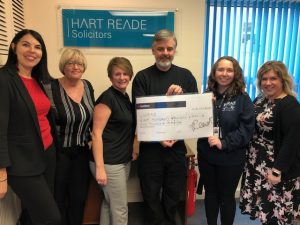 Early February WRAS was proud to visit staff at Hart Reade Solicitors in Eastbourne who had chosen WRAS as one of their charities for the year and received an amazing cheque for £895.13. My colleague Ellie Langridge and I attended to collect the cheque.  We have also started receiving cheques from people wanting to sponsor our cages within the hospital after an appeal which went out with our last newsletter. We have already had several cages sponsored in memory of people as well as as birthday gifts. The sponsorship starts at £250 and is permanent.

Ellie, Kristy and I were called to Uckfield Waitrose mid February after they had a little wren discovered flying around in the store. After spending about 20 minutes searching for it we almost gave up and left, but then suddenly it was spotted between the entrance and exit doors at the back of the store. Rescuers tried to catch the bird but without any luck before it managed to get into the main store again. The little bird was spotted on top of one of the fridges and as rescuers tried to net it, the little bird fell to the floor down a gap. Wondering where the bird had gone it was eventually found underneath, and through more luck than judgement Ellie managed to catch it in a net as it tried to fly out and along the aisle past the frozen veg.  With storm Ciara blowing a gale outside, the wren was taken outside behind the store to a conifer bush when it was more protected from the elements. 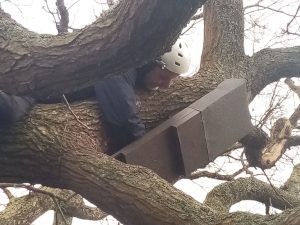 I really must remind myself that I am not getting any younger!  I was also called to an oak tree which had fallen across Little Marshfoot Lane off Mill Lane in Hailsham. Up in the tree was a large bat box. The owner was concerned that there could be bats in the box which were then at risk as a result of the tree falling.  I climbed up the branches to the box, but due to the angle I was struggling to check the box fully. With rescuer Clare below me I was able to lower the box down to the floor where it could then be checked over properly. After climbing up I decided I would take the easy way down and use a ladder! 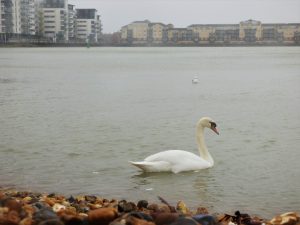 We have also received a number of calls of concern about a swan at Sovereign Harbour in Eastbourne.  The swan has been floating around for several days, and people have grown concerned for its welfare.  Both myself and colleagues have been down and the swan is showing no signs of ill health.  Local residents have seen the swan fly. It is using both legs and feet ok. Its eating food which it is offered and showing no sign of injury or illness.  Although not seen in the outer harbour in Eastbourne very often, it does occur in places like Newhaven and Shoreham Harbour and their rivers which are tidal. Swan are water birds so it is not unusual to see them on the sea.

We are now recruiting seasonal rescuers to help with the busy spring and summer seasons. The shifts are 8am till 3/4/5pm and 3/4/5pm till 9pm. We are happy to be flexible with the finish time of the day shift and start of the afternoon/evening shift.

Check out the video on our website and fill in the form to apply. In order to be a rescue volunteer, you need to be presentable, good with dealing with the public, able to stay calm in an emergency, level headed and good with animals and birds. You also need a clean driving licence in order to drive our ambulances. We have both cars and transit vans and must be willing to drive both vehicles. Training is on the job. New rescuers start with the basic collections and slowly build up their experience. Where possible rescuers work in pairs for safety. 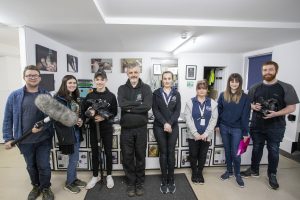 We have had some students from Solent University with us filming for their university course. They spent a week following the charity around. They were able to film a fox rescue and subsequent release in Langney. The fox had managed to get inside the shed after storm Ciara blew out a window.  After using a dog grasper to secure the fox, I had to crawl inside the shed to gain control of the fox so it could be safely lifted out to a cage. After a check over the fox was found to be fine and released later that night once the roads were quieter.  We were also called out to a road casualty squirrel at Arlington. The squirrel managed to drag itself through bushes and into a tree stump.  Luckily the stump was quite rotten so I was able to dig down through the stump and eventually after a lot of perseverance grab hold of the squirrel. Unfortunately the squirrel needed euthanasia due to a broken spine.  The students also filmed a hedgehog rescue in Eastern Close Polegate which had wounds to its head. They also filmed another difficult rescue of a Fox off Buxton Road Eastbourne, which had injuries to its head and jaw.  Emergency medication was given and then assessed by WRAS vets, but sadly this one passed away.

March is typically the month when rescues start to increase. It will be interesting to see what happens this year with such strange weather still.

He's off again! I tried a toy for company but the first one just wound him up more. The 2nd one was more of an attack target rather than company but a little less manic ...

Do you want to make a bigger difference in helping the wildlife of East Sussex? We need you to take out a standing order to help support our charity on a regular basis.
Donating just £1 or £2 a month can make a big difference and allows us to budget for the future and plan ahead. Making the charity more secure for the future.
You can download our latest donation and standing order form via this link:
wildlifeambulance.org/wp-content/uploads/2020/09/Sum-2020-Website-Form.pdf ...

He clearly wasn't happy with his bed and made his own and tucked himself up for the night. Never seen this in all my years. ...