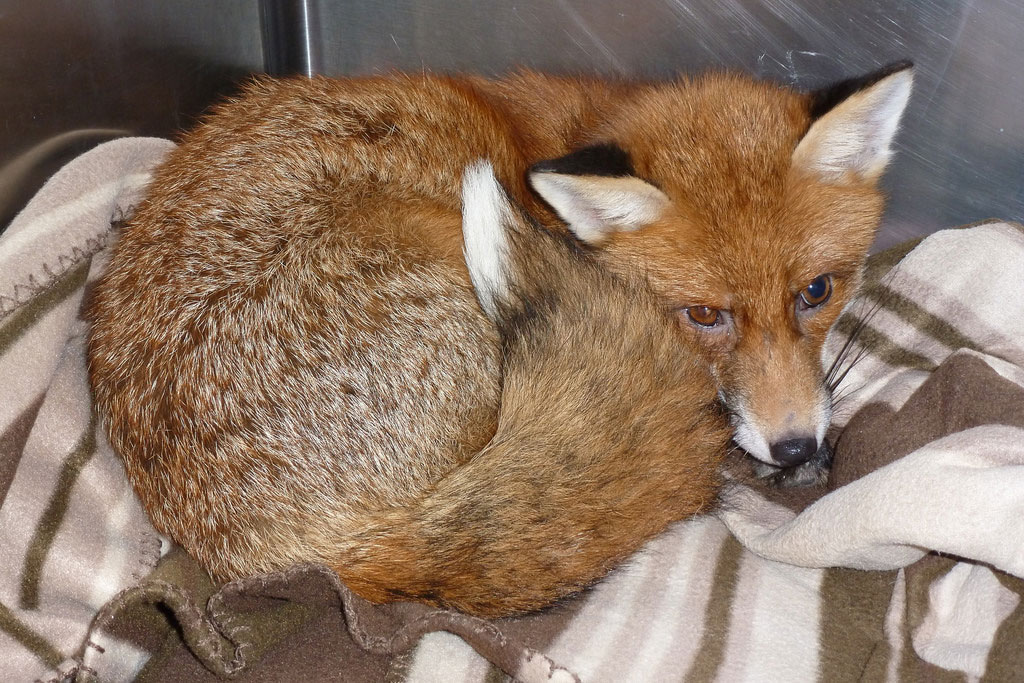 WRAS receives numerous calls from members of the public concerned about foxes. Limps are one of the most common concerns, however not all limping foxes will need to come in to care. Foxes which are able to put weight on the limping leg will normally recover given time and more likely to be just muscular damage. As with humans these can take over six weeks to recover. During this time a fox can be supplementary fed to ensure the animal is getting enough food. However, it is not advisable to continuously feed or you will reduce the foxes territory size and as a result loose control over valuable natural food supplies.

Foxes which hold a leg up and the foot or end of the leg dangles out of control and flopping around will probably be a nasty fracture and will need catching. A leg which is held out to the side or an unnatural angle may be dislocated. Observe the injured fox and watch how mobile the fox is. These animals may look very slow when injured but normally they are conserving energy so that when rescuers approach they can use this stored up energy to run off! Dealing with these types of injuries can be extremely difficult and frustrating for the rescuers.

Supportive feeding to help keep an injured fox visiting on a regular basis is valuable and helpful in terms of being able to catch the fox. This can then allow rescuers to consider placing a cage trap or look at possible ways of treating a fox using medication provided by sympathetic veterinary surgeons.

If you have a limping fox visiting keep an eye on foxes biting the lower section of leg, becoming more lethargic, sitting or walking but unable to do so without staggering or weaving from side to side. Also if the fox collapses to one side in an uncontrollable fashion then please contact WRAS immediately for advice.

Foxes can be dangerous to handle and rescuers expect to be bitten at least once a year by foxes who are in pain and frightened. If you find a road casualty park your car where it will help protect the fox from being hit again and turn on your hazard warning lights, however if it is dangerous to stop where the fox is move to a location where it is safer. Call for help as soon as possible. If the fox is in a dangerous location and could cause an accident then call the police using 999 and ask for assistance.

If the fox is alert or moving watch it but do not try to catch or hold it, stand well back. If the fox tries to move towards the road and traffic then try to discourage it by standing between the fox and the traffic, but again only do so if it is safe to do so and you are not putting yourself at risk. If the fox is lying on the road and not holding its head up, then cover the animal using a towel or blanket, again keep your distance once the fox is covered and wait for help to arrive.

Foxes caught in snares should not be cut free and just released. Call for help as soon as possible. Such calls will be treated as emergency calls. Snares cause ligature wounds and once freed from a snare the toxins which build up below the sometime invisible ligature wounds can used the fox to have a heart attack. These creatures must come in for observation and care for at least 24 hours to ensure the animal is safe and well. Snares around legs can be extremely dangerous as the pressure can cause the top layers of skin to die off and in the worse case scenario the loss of the limb completely.

Call for help as soon as possible. Try to cover the animal over with a blanket or large towel but do not get too close or get close to that the animal can bite you. It is more important to try and cover the head than the body but try to cover as much of the body as you can. Once the head is covered the animal will calm down. Do not stand too close to the animal and keep noise down or you will frighten the poor creature.

This is fairly common. When a fox jumps over a wire fence, one of the legs sometimes goes the wrong side of the top strand of wire and ends up twisting the wire round the leg trapping the leg in the air where the fox is then left hanging. This needs to be treated the same as a snare injury. When you approach try to get the head covered in order to calm the fox down. This can be more difficult as the fox is hanging rather then lying on the ground. Call for help as soon as possible and rescuers will cut the fox free and take the poor creature in for an assessment of the leg damage and other potential damage to the hips.

East Sussex WRAS does not remove dead foxes, except where an illegal death is suspected. It is the responsibility of the land/property owner to dispose of a dead foxes if found on their property, however your local council or veterinary centre may be willing to assist with the disposal. If you find a dead fox on the road it should be reported to your the district, borough or city council for disposal as they have an obligation under European law to dispose of dead animals on the road.

Fox cubs are often found in gardens, parks and fields where you wouldn’t expect to find them during the daytime. In the spring it is common for vixens to move their young from one den to another. In order to do this they normally carry their young one at a time. If the distance is lengthy, the vixen will use a half way point, depositing her young in tall grass, under shrubs, behind obstacles or similar to hide them. Sometimes this process can take more than one night and therefore the young can be left hidden at the half way point during the daytime.

If you find more than one cub in your garden hidden in long grass or bushes then you should leave alone unless they look obviously sick or injured. Even then you should call for help and someone can visit and check they are ok without risking their Mum abandoning them unnecessarily.

If you find a cub which is wondering aimlessly round your garden during the daytime or staggering then you should place the cub in a box if it is weak enough for you to catch. Alternatively place a box over the top of the cub trapping it in your garden or leave it alone but keep an eye on it an call for help and advice.

If you are not sure then please call and we will attempt to attend and check them.

It is possible to re-unite cubs with their mums on some occasions, this involves rescuers sitting up into the night watching and monitoring the cubs where they were found. This is not always successful but does frequently work.

Feeding foxes in your garden

WRAS does not support the regular feeding of foxes in gardens, due to the problems they can cause as a result. Like all animals, foxes will breed to match a food source. The occasional bit of food left out for them is not a problem but feeding large quantities can cause problems. One garden WRAS visited a gentleman was putting out four large bowls of food per night for the foxes. After a few months the foxes visiting the garden had changed from 3 at a time to 9 at a time. Surprisingly the neighbours were not happy at the damage which was being caused by attracting the foxes to this garden. Some neighbours complained and as a result called pet control who started shooting them.

If you want to put out scraps occasionally this will not be a problem but limit the amount of food and the frequency in which it is fed. Putting out food infrequently and only in small quantities mean that if the person feeding goes into hospital or dies or moves away the foxes will not starve as a result.

Catching, relocating and releasing a wild animal into an area it does not know without putting measures in place to ensure its future wellbeing is an offence.

The removal of any unwanted species from an area is only a quick fix solution which wont last long. It is best to look for long term solutions to the problem or you will end up wasting much more money as a result.

Shooting and or removing unwanted wild does not solve the problem of why that species visits. Rarely are animals on their own so if one fox is shot or relocated it only opens up a new area for others to step into. Wild animals generally control their breeding based on suitable environment, food and water sources, shelter and access to other animals of their own species.   So if you don't want a fox visiting you need to think about why it would be visiting and remove that reason. This could be because you are putting food out for your cat or hedgehogs for example or food falls from a hanging bird feeder and they clear up the debris.  It may be because their is a gap under your shed which provides them with a warm and secluded spot to sleep. Removing an animal visiting for one of these reasons will only serve as a gap for another to come in and take over. So very quickly after shooting or relocating a fox another will just take its place and you will be back to square one.

Deterrence is by far the better long term solution.  It is not always simple but in the long term it works better and is generally cheaper too.

Fox-a-Gon on 0208 925 9639 or www.fox-a-gon.co.uk will undertake everything from small household gardens to schools, sports clubs and corporate properties, and are specialists in fox proofing large areas where chemical deterrence on its own might be insufficient.

For those who prefer a DIY option, Foxolutions stock and provide the most effective deterrents and may be reached on 0208 090 2038 and www.foxolutions.co.uk.

This very poorly badger arrived this evening having been found collapsed in a puddle.
Hypothermic with a damaged eye and showing signs of possible toxic ingestion. We are doing everything we can to pull her through but the next 24hrs will be crucial. ...

He would really like to be able to help fund some new equipment for WRAS's orphan team this spring and summer as they have various items like teats, syringes, bowls, food, incubators, heat pads, and aviary panels they need every year.

To help celebrate his big 50 please make a donation to East Sussex WRAS.

We haven't named him yet - suggestions welcome! ...