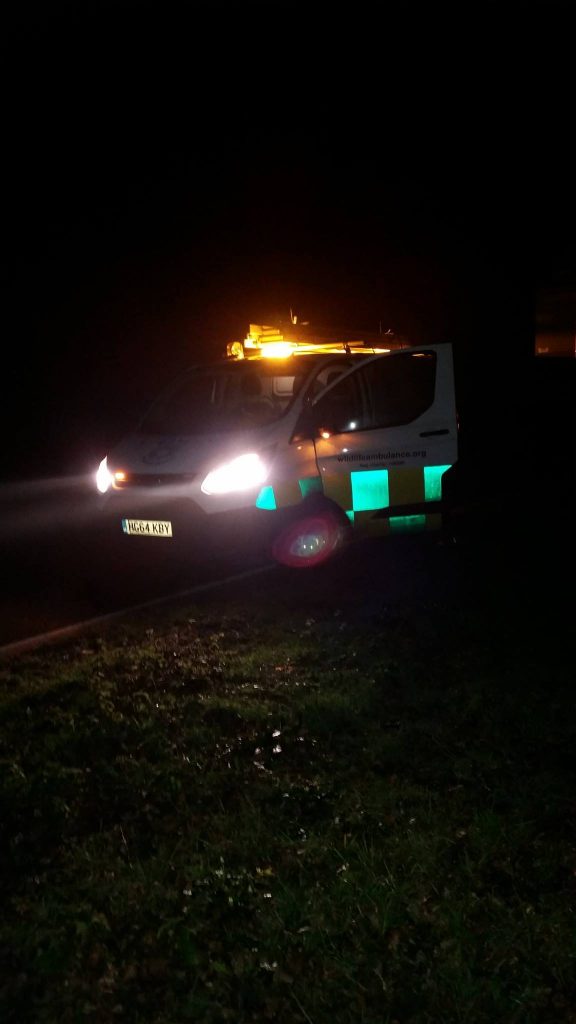 Rescuers from East Sussex Wildlife Rescue & Ambulance Service (WRAS) dealt with an road casualty badger last night (Saturday 8th April) just after midnight on the A22 near East Hoathly. Rescuers were on their way home when they came across the injured badger in the middle of the road.

Rescuers put their orange flashing warning beacon lights on as well as their hazard lights and pulled over to help the injured animal. Chris rushed over to the barely alive badger and started to assess it.  Passing motorists failed to pay any  attention to the ambulance or its warning lights and continued to speed past. "There were bits of car everywhere across the road. The poor badger had taken quite a hit" said chris, “whatever had hit the badger had left large bits of bumper and body work all over the road.”

As motorists continued to speed past, shards of this bodywork were sent flying towards Chris, the casualty and the ambulance. "Whilst the road was quiet I moved the badger to the safety of the grass verge where I then started to examine the badger and provide first aid. As I was trying to make the badger comfortable, a large bit of plastic struck me on the back when a speeding car flew past and drove over it, the car made no attempt at slowing down" said Chris.

"Even from inside the ambulance I could hear the bits hitting the side of the vehicle" added rescuer Laura Carrick.

Sadly the badger passed away shortly after at the roadside. “Knowing how busy the police are on a Saturday night I knew there were was no point in calling the Police so I cleared the all of the remaining body work off the road to avoid further hazards to other motorists” added Chris.

Chris has pleaded with motorists to slow down at night  and said “If you see one of our ambulances with its lights on, we are trying to protect ourselves, the casualty and other road users. Please slow down, it is scary enough approaching an injured animal in the dark, but it is even harder being showered in plastic as cars fly past at 60mph. There could be an animal in the road that could become a hazard to other road users like a mobile deer that we are shielding. Last week we helped Sussex Police with a broken down car on the A27 as there was a family of 5 sitting in their car in the fast lane. We used our warning beacons to direct traffic whilst waiting for the police.

I know it is easy to ignore flashing amber lights compared to blue lights but people like us, road recovery, council workers, road workers, bin men and many more need you to slow down and be aware that people may be in the road and help keep us safe” said Chris.

“I am relieved that my colleague Chris is ok, and I’m glad that our training helps us to stay safe.  Any motorists believe it is safer to drive faster at night as there are less cars on the road, but there are many more hazards that you can’t see. There have been a number of fatalities as a result of animals crossing roads. Badger, Foxes, Deer, Hedgehogs, to agricultural animals and even escaped pets.  Night is no more safe than any other time of day. On Thursday night last week I had 6 sports cars flying down the A22 between Hailsham and Polegate going what must have been in excess of 90mph, it would only have taken a badger to run out in the road for there to have been a serious accident involving innocent motorists which would have got caught up as a result. So please slow down at night” said Trevor Weeks MBE founder of WRAS.